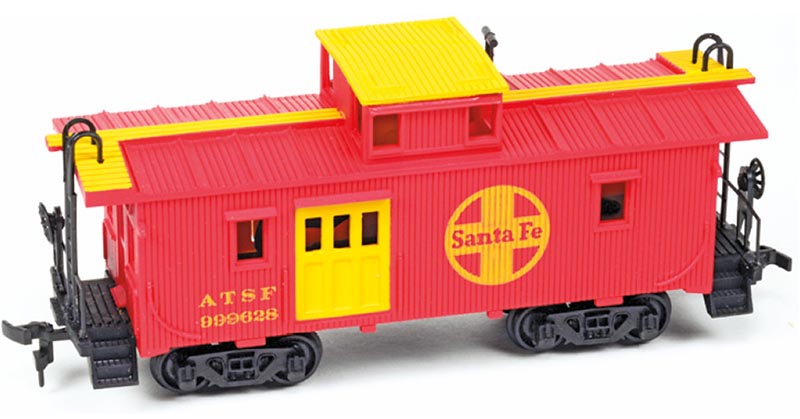 Possessing an uncommon appearance, this Bachmann caboose likely made some serious modelers debate a kitbashing project when it was released new.

Operating accessories add to the fun of model railroading. Examples exist in every popular hobby scale. The HO market enjoyed a boom in this segment during the 1970s. Among the prolific producers of these items was Bachmann Trains. The company continues to offer a selection of action accessories today.

Bachmann’s expansion in the 1/87th market from its Plasticville USA series of HO-scale structure kits to a full line of model railroading items begins in 1970. The company launched its N-scale model trains in 1968 and followed with a new HO line two years later. Bachmann’s HO debut included its GP40 and F9A diesel locomotive models, a selection of freight cars, as well as brass track and a power pack.

The manufacturer’s 1976 product catalog is the first to include a section for operating accessories in HO. For 1976, Bachmann shows an illustration for its bascule bridge and an actual model is on display for its dual crossing gates. Not listed among separate-sale operating accessories, but included in the 1976 catalog is Bachmann’s exploding old-time passenger car. This item was exclusive to The Great Iron Horse Train Robbery (#1870) set release. 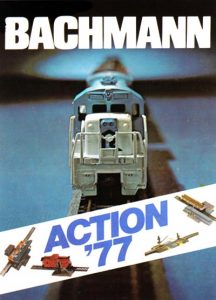 The 1977 annual catalog includes the cover headline, “Action ‘77” and the number of accessories expands greatly. In addition to the previously introduced bascule bridge and dual crossing gates, Bachmann adds operating log and gravel cars, stock car and corral set, tri-level car transporter, and the operating action caboose. Bachmann presents mock-up model for its action caboose in 1977. Production examples, lettered for Santa Fe appear beginning in 1978. This item is listed with an $8 retail and remains in the catalog through 1981. Following a half-dozen year‘s absence, Bachmann’s operating caboose returns in the 1987 catalog.

In the early 1980s, Bachmann’s stock numbering system saw revision and this late-1980s version reflects this with a 46-1204 stock number. The offering carries a $12 retail in 1987. By the early 1990s, Bachmann lists this item as 46-1206 and finally 46206 and it sells for $15. Research shows Bachmann’s operating caboose last appeared in 1993. The introduction of the roadbed E-Z Track system presented compatibility issues with accessories that did not adapt to the different height of Bachmann’s new track system. Some items, such as Bachmann’s dual crossing gates, did receive a re-tooling to include E-Z Track. However, the operating caboose to date has not been updated.

If you’ve ever wondered what goes into making a release of this variety, here’s a look at Bachmann’s late-1970s Operating Action Caboose (#1428). This action accessory release presented a caboose model and platform. A trigger along the sill of the caboose depressed inward, as the caboose passed the platform. The trigger caused the side door on the caboose to open and a figure emerged. The effect created the appearance of the crew member reaching out to grab a bag on the platform. Once the trigger returned to its out position, the figure slid back into the caboose and the door slid shut.

The caboose model provided is noteworthy for collectors. The tooling is unique among Bachmann’s line. You might expect that an existing caboose shell would have been employed to create this offering. Not the case. Instead a never-before and never-since offered caboose came with this action accessory release… 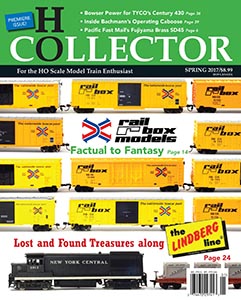