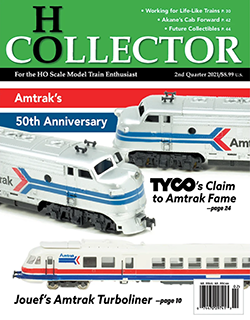 2nd QUARTER 2021: Amtrak celebrates a milestone marking 50 years of service to rail travelers. HO Collector looks back the first ready-to-run models produced in Amtrak livery from the early 1970s. This edition also introduces a new series by Tim Garner on his time working for Life-Like. All this and more in the 2nd Quarter 2021 issue of HO Collector!

by Tony Lucio — As Amtrak turns 50 years old, co-editor Tony Lucio has an interesting European model to share that reproduces the French Turboliner train set brought to the U.S. in the 1970s.

by Tony Cook — What was the first mass-produced Amtrak models in HO scale? Co-editor Tony Cook presents TYCO’s F9A and streamlined passenger cars that made up the line’s “Inter-City” set in 1972.

My Life at Life-Like

by Tim Garner — Ever wonder what it was like to work for one of your favorite hobby companies? Tim Garner presents a brief history of Life-Like as he introduces you to his experience of working for them.

A Cab Forward from Akane

by Tony Cook — This Southern Pacific articulated giant was imported in 1959 from Akane. Akane was owned by the same guys who brought you Lifoam coolers and Life-Like model trains.

by Tony Cook — Are you missing out? Why keeping up with current releases is important to collectors and a pair of interesting Amtrak releases you don’t want to miss!