One of the delights of collecting anything is finding surprises and rare finds. Coming upon this Allegheny Midland Century 430 at a swap meet was an eye-popper! Then discovering it was also a vintage brass import model added to the excitement. Every collector has stories similar to this one, and it makes the pursuit of classic HO-scale model trains all the more fun! 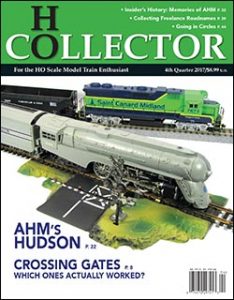 At a local NMRA division train show, I spotted this locomotive in the estate of an elderly gentleman downsizing his life’s collection. It turned out to be brass, an Alco at that, and I recognized the road name… Since the price was right, I had to bring it home. When I put it on the test track, I was shocked to hear it come to life with full sound on analog! When I switched to DCC, it responded properly with controllable and directional lighting as well. Based on the replacement headlight and some other minor touch-ups, I guessed it was converted, but didn’t want to risk opening it up to investigate. The seller didn’t know about it, so who did the modifications and when?

Knowing some of the history of the Allegheny Midland, I reached out to its creator, Tony Koester, now a columnist at Model Railroader. He was happy to authenticate my find and provide some backstory, shared here with his permission:

“Yes, the AM did have three Alco Century 430s, all brass imports. Two were painted in the Appalachian Lines red and yellow, and one was painted black with yellow stripes. All had ‘CRE’ lettering on the battery boxes, as they were ‘leased’ to the AM by Cheat River Engineering. All had Dynatrol analog receivers installed. All three were custom painted by CRE, but I did all of the lettering using custom Microscale decals.

“I am greatly relieved to discover that you have one of the two Appalachian Lines red-and-yellow units. The third Midland Road C-430, road number 411, which was painted in the Nickel Plate Road’s black-with-yellow-stripes scheme, was stolen from its box while it resided in Mike Brestel’s Western Hills hobby shop. We keep hoping it will show up.

“Cheat River Engineering was owned by my friend Max Robin. Max had worked for the New York Central when Alco’s Century 430s were delivered, so he had a great fondness for that type. He also contributed two leased CRE Alco Century 630s to the roster. Max and a talented fellow named Joe Borick rebuilt my three Alco Models C-636s, but those were not ‘leased’ from CRE. I don’t have any of the CRE C-430s or C-630s, but I believe I still have two of the C-636 trio.”

This article appeared in the 2017-4 issue of HO Collector.