TYCO’s wide range of colorful models offered throughout the years are popular with many collectors. TYCO’s Burlington SD24 diesel was cataloged from 1977 through 1981. 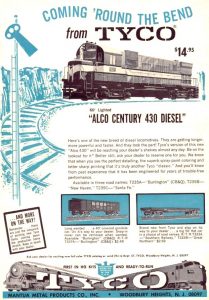 The history of TYCO trains can be traced back to John Tyler, a pioneer in HO scale who helped found the Mantua Toy & Metal Products Company in 1926 with other members of his family. They began selling trains under the Mantua name in the 1930s. Early offerings included the powerful Midjet Motor as well as a variety of rolling stock and steam locomotive kits. The shift towards “ready-to-run” (RTR) train sets after World War II led to the creation of the Tyler Manufacturing Company in 1952, better known as TYCO.

During this period of growth, the company’s entire line of model trains were marketed as TYCO-Mantua. Kits continued to be produced under the Mantua name, while TYCO sold RTR buildings and train sets. Collectors refer to this time period as “the blue box era” as TYCO offered kit versions and later ready-to-run(RTR) versions of various steam and early diesel era model trains in a light-blue packaging. 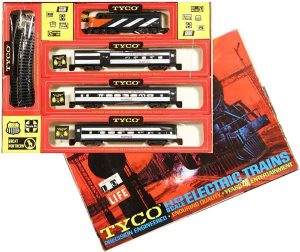 A family-owned business from the start, John Tyler’s son Norman Tyler was named president of TYCO Industries, Inc., a consolidation of TYCO and Mantua, in 1967. During the 1960s, the TYCO line added HO scale slot racing cars. The model train line saw growth and expansion during this time as well. The “red box era” models can be identified by their bright red packaging.

Consolidated Foods purchased TYCO in 1970, and manufacturing was shifted from New Jersey to Hong Kong.  Consolidated Foods would later change its name to Sara Lee, though Norman Tyler remained as an executive with the new company.  This change in ownership ushers in the “brown-box” period for collectors. Prior to 1970, TYCO offered models that reflected fairly accurate prototypes. After 1970, TYCO’s offerings wander into a fantasy world of unprototypical models. It is this interesting period that provides modelers and collectors with such items as a Popsicle and StarKist Tuna box cars and various Bicentennial locomotives. Looked down upon by serious hobbyists, these items none the less have found favor among those who enjoyed them as kids and now enjoy collecting them as adults. 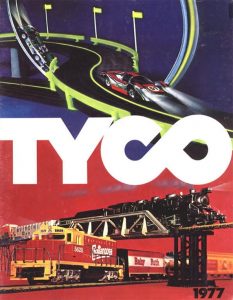 The Consolidated Foods purchase of TYCO did not enjoy much of a honeymoon period.   The book Toyland by Sydney Ladensohn Stern and Ted Schoenhaus, reports TYCO’s returns were unprofitable by 1972 and Consolidated Foods was put in the position of folding up the TYCO line or making major changes in operations.  Management remained positive on TYCO and placed Dick Grey as president and Harry Pearce as chief financial officer in 1973.

Grey and Pearce brought TYCO back into the black by the late 1970s. When the old factory in Woodbury Hieghts, N.J., was placed on the market, Norman Tyler purchased it and re-launched Mantua trains in 1977. Consolidated Foods sold TYCO in 1981 for $18.6 million to Savoy Industries.  During this time, TYCO’s train line was becoming even more outlandish with items linked to television shows like “The A-Team” and movies like “Rambo,” with few items relevant to serious model railroaders. The line of model trains in general also was shrinking in total variety of products offered. 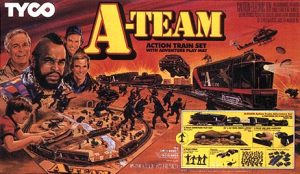 The appeal of model trains was dropping and TYCO’s management began to look for new product lines for the company.  The company added the “US-1 Trucking” HO scale slot cars to its line in 1981. The 1980s also saw TYCO diversify into such things as “Super Blocks,” which were similar and compatible with LEGO building blocks. The company also began offering telephones; remote-control vehicles; and other items beyond the model train line.  These changes in product line see the model train category down to 60% of TYCO’s sales by 1986. 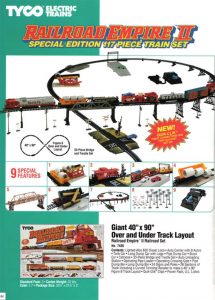 In early 1986, Savoy Industries put TYCO stock on the open market generating $13.4 million and ending Savoy’s involvement in the toy company. Model train production ended in the 1990s, with the final catalog appearance in 1993. Only three train sets were offered in the final year, including Railroad Empire II, Overnight Freight, and Santa Fe 72. No separate accessories were offered in this final year of production.

Production during these final years is quite different from what had been previously. Mehano, a Slovenian manufacturer, began supplying product about this time, which led to some interesting oddities. For example, the “Rock Island Express”(No.7403) train set from the early 1990 shows the Shark Nose pulling the train on the front of the box. The sides show an EMD F-9A (and not TYCO’s, either), in command of the train. Finally, once the box is open you have an Alco FA as power for the train. Confusing to say the least! This adds another dimension to collecting TYCO offerings and cataloging their product line.

International Hobby Corporation ended up with some remnants of this famous line of toy trains. An example is in the September 1995 Model Railroader where IHC advertises a “CLOSEOUT ON TYCO.” Examples of the TYCO items being offered includes the Burlington Northern GP-20 listed with a retail of $44.98 closeout priced by IHC for only $7.98. Additionally, IHC lists the Alco C430 in USA Express and the Super 630 in Santa Fe. Also found are a number of odd TYCO items including operating accessories and various track pieces.

In the years since TYCO exited the HO-scale train market, IHC has offered various former TYCO locos, freight cars, and structure kits new packaging and new roadnames. An example is IHC re-tooling and re-issue of the old TYCO EMD SD-24 in the fall of 2004.  IHC itself ceased operating in 2009 and the former TYCO molds have not returned to market.

As for the Tyler legacy, the new Mantua published its final catalog in 2001. Model Power purchased the company’s tooling and sold models under the Mantua Classics name. Model Power and the Mantua Classics line were subsequently acquired by Model Rectifier Corporation (MRC) in 2014. The TYCO brand name was acquired by toy manufacturer Mattel in 1998, surviving as the Mattel Tyco R/C division until the early 2010s.