The purpose and goal of this HO Collector presentation is to provide a chronological listing of HO-scale diesel locomotive models produced by Athearn during the company’s “Blue Box” era. Any of the diesel models presented would easily make for a solid subject for individual articles, and some are currently in the works for future editions of HOC. Consider this to be an introduction or general survey of those well-known Athearn models and not an in-depth examination of any particular one.

The parameters for this look at Athearn’s HO-scale diesel models includes plastic shell releases introduced in kit form to the company’s standard or Blue Box line of model railroading products. The arrival of the Globe Models F7 in the mid-1950s is the starting point and the final Blue Box diesel model presented is the SD40-2 variations delivered in 2000. In addition to diesels, you’ll also see references to the company’s steam locomotives offered over the years, as well as the few times Athearn was involved with electric locomotive prototypes.

Athearn is now a company differing greatly from what it was during the Blue Box era. Today, you’ll find diesels which began as Blue Box that now may reside in assembled and enhanced form as Athearn Ready To Roll and Roundhouse releases. Horizon Hobby, Athearn’s owner, purchased Model Die-Casting/Roundhouse in 2003. Roundhouse did not offer many diesels, and I’ve generally kept them out of this survey. 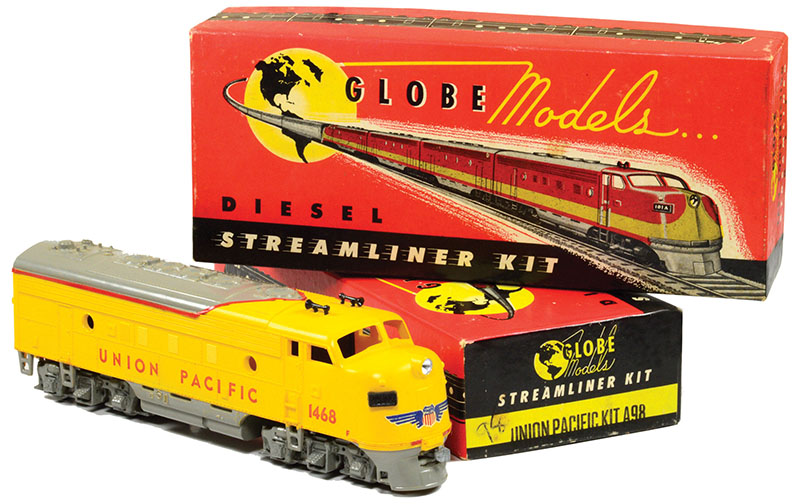 Injection-molded plastic model trains were in their infancy when Globe Models introduced its HO-scale Electro-Motive Division (EMD) F7A and F7B diesel models in 1954. This tooling is probably the longest-serving HO-scale diesel model on the market that has essentially never been out of production. Collectors should look for examples in Globe Models boxes, which are all-plastic unpowered, basically static, models to obtain the earliest issues for this popular F-unit. The initial Globe Models F7A and F7B releases sold for less than a dollar each. Model Railroader, in its October 1954 review states, “the Globe F-7 is just about the most beautiful plastic casting we have ever seen.” By the end of 1954, this F7A and F7B were presented in ads as being from “Globe Models, An Athearn Quality Product.” The first two road names were Santa Fe (red-and-silver Warbonnet) and Union Pacific. Athearn brought a drive mechanism to the Globe F7s, as did a number of other companies at the time.