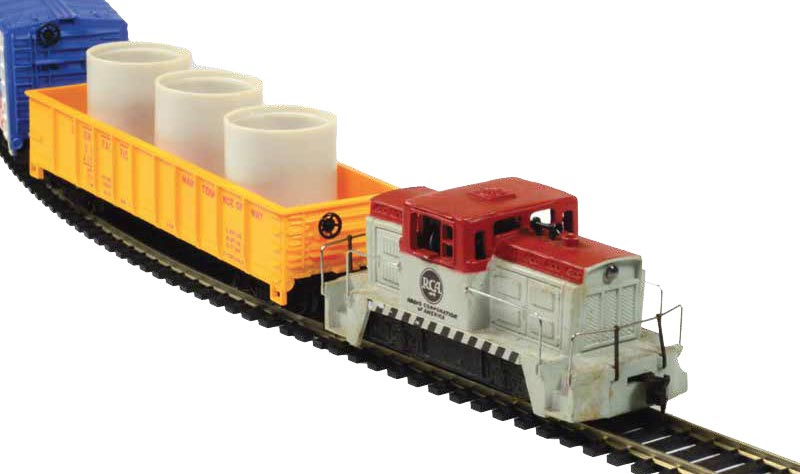 By Lawrence C. Gibbs/Photos by Tony Cook and Tony Lucio

Plymouth Locomotive Works’ CR-4 diesel-hydraulic locomotive of the 1960s, and the HO-scale model of it made by TYCO/Mantua, have been a topic of interest to collectors for many years. I hope this information will help HO hobbyists have a little easier time identifying, collecting, and repairing these models.

The CR-4 is a very interesting diesel locomotive. Designed by Christian Root in the late 1950s, Plymouth produced this small four-wheel center-cab critter between 1960 and 1965 in very limited numbers. How limited? Based on somewhat conflicting information, there were just five or six sold. One apparently went to Africa, while the rest stayed in the U.S. The small production number is deceiving, though. While the list of original buyers appears to be lost, over the last 57 years these locomotives served a number of companies and railroads. A review of the fleet finds names including National Iron Ore Co.; Mohawk, Adirondack & Northern; Minerals Equipment; James & Laughlin Steel; Lowville & Beaver River; Republic Steel; Missouri Farmers Association; Imco; Continental Grain; Archer Daniels Midland; American Cyanamid; and Western Maryland Scenic Rail Road. Though few in number, these locomotives are well-traveled! 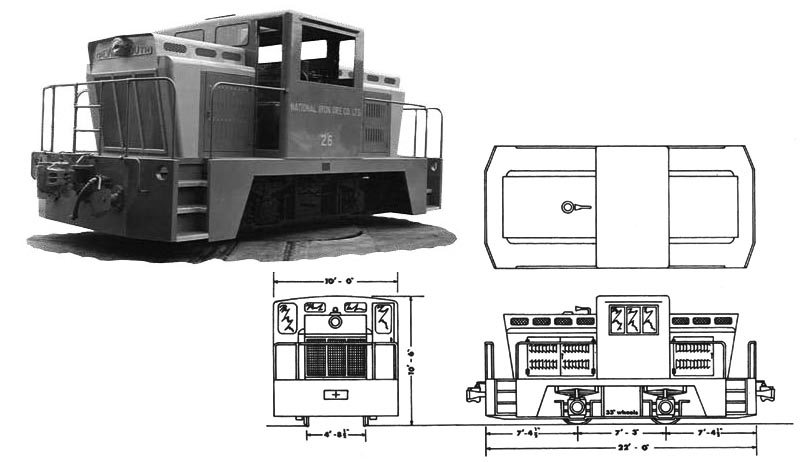 The angled “shark-nose” hood on each end is unique to the CR-4 among known industrial-type locomotives. This quirk of design was made famous by the HO models, which sold in numbers hundreds of times beyond the prototype. What brought about this fancy design for a utilitarian industrial diesel switcher? I can only speculate, but it probably had something to do with prevailing aesthetics of the day. Recall this was also the time of big fins on automobiles and the beginnings of the space race. This may have influenced the designer toward something different and distinctive. Pride is evident in the model designation CR-4 sharing the designer’s initials.

Plymouth’s CR-4 used a hydraulic transmission directly driven by a diesel engine. Purchasers could customize the loco to their needs with tonnage rating of 40-65 tons; 300-700 horsepower, as well as variable gauge options (36-66 inch). The diesel possessed a 22-foot length, stood 10 feet, 6 inches over the railheads, and was 10 feet wide with a 7-foot, 2.5-inch wheelbase. This industrial switcher rode on 33-inch wheels and could attain a top speed of 50 mph. Plymouth cataloged a CR-6 with the same body style and six wheels or three axles versus the CR-4’s four wheels/two axles, but no CR-6s are known to have been sold and/or produced. 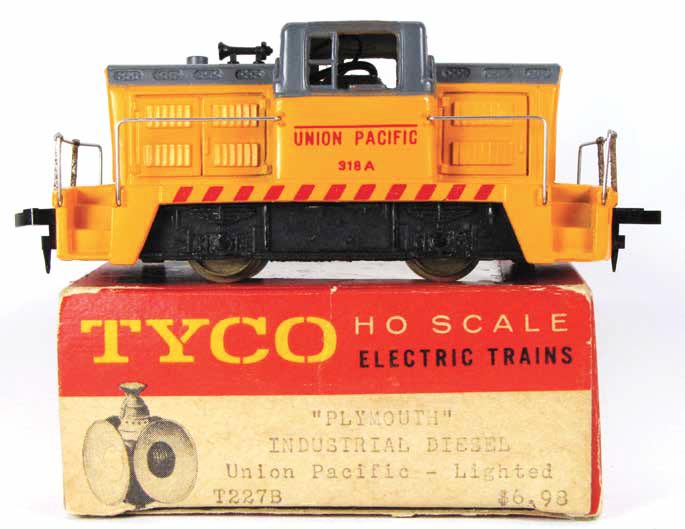 A Brief History of TYCO/Mantua

As the history of TYCO/Mantua is somewhat complicated, this article will include most of the important highlights necessary for a solid understanding of the HO model. Some background will be helpful as it relates to the production of the Plymouth CR-4 under both names (TYCO and Mantua).

John Tyler and James Thomas established Mantua in 1926. Mantua initially manufactured wood and metal boats. The boat replicas’ strong point was a Mantua-designed 6-volt AC motor that came about when available motor units failed to meet the company’s expectations. In 1930, Mantua decided to test other “waters” for its small motors, via OO-scale (Double-O or 1/76-scale) model railroading.

The model railroad market was expanding rapidly before the Second World War, and the demand for their newly advertised motors far exceeded expectations. In 1932, Mantua began promoting motors in the burgeoning market for HO-scale model trains. These first HO motors were a.c., but Mantua soon released a d.c. version. In 1937, they offered their first HO locomotive, a 2-8-0 Consolidation steam locomotive. As with most HO locomotives of the time, the 2-8-0 was a craftsman-level kit.

The company name was changed to Mantua Metal Products in 1938, and production was going well until the U.S. became involved in World War II. Like many U.S. manufacturers, Mantua converted to the production of equipment for the military. They did such a good job with their assigned navigation item contract, the company received an award in 1945 from the U.S. government.

After the war, Mantua converted back to model railroad production. In 1947, James Thomas left the partnership leaving John Tyler as head of the company. Mantua’s model railroad items were primarily available as kits until 1953, when they offered their first ready-to-run train set. In 1957, Mr. Tyler decided to differentiate between his craftsman kit line and the newer ready-to-run items. He coined the name “TYCO” (from “TYler’s COmpany”) and established it as a separate company for the fullyassembled model railroad items. TYCO assembled parts made by Mantua and then sold the finished products. In 1967, both companies were combined under the name “TYCO Industries,” and the Mantua name was phased out.

In 1970, TYCO Industries was sold to Consolidated Foods and founder John Tyler passed away in 1972. A few years later, with most production having been moved to Asia, the New Jersey factory was put up for sale. John’s son, Norman Tyler, decided to buy the factory. The Tyler family purchased most of the original Mantua tooling back from Consolidated Foods, and began once again marketing under the Mantua name in 1977. 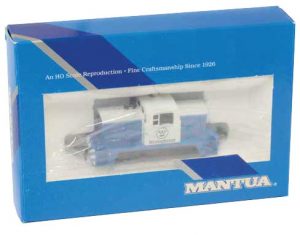 Now that we have some history of the prototype and the model maker, it’s time to consider the model itself. Whether sold under the Mantua or TYCO brand, the model was only available as a nearly ready-to-run locomotive with the user left to install handrails. TYCO introduced the CR-4 in its 1960 catalog, and produced it in eight known road names between 1960 and 1967.

The model is generally faithful to the prototype, but as was typical at the time, it had a few design concessions. It was obviously a challenge to fit TYCO’s standardized “MU-2” motor and drive into a tiny locomotive shell and as a result, the model is slightly oversize at 26 feet, 6 inches long versus the prototype’s 22-foot length. The model’s functional wheelbase of 120 scale inches borrows from the larger diesel locomotive (EMD Blomberg) trucks the mechanism was first designed for, as opposed to the CR-4’s actual 87-inch wheelbase. Surprisingly, this nearly three-foot discrepancy is not terribly apparent! More evident compared to the prototype, are the model’s hood doors being proportionally oversized. The model’s “shark nose” ends are not as dramatic either, as its radiator grilles are vertical and therefore lack the forward rake. Perhaps the most puzzling detail is an apparent radiator fan in the center of the cab roof. This detail adds visual interest but makes little functional sense, and is not present on the prototype. 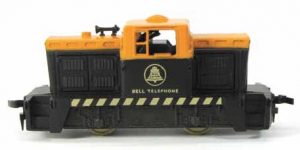 After being out of production for about a decade, the “new” Mantua Company returned the model to production with almost no changes save one: during the earlier TYCO production, the dies soon wore badly in the tops of the hood sections. As a result, all Mantua-produced shells have a reworked vent mesh screen with a coarser appearance compared to TYCO’s original releases. However, this change was actually phased in during TYCO’s era. Over the vents, the earliest TYCO shells have smoothly rounded hood corners that match the prototype’s distinctive styling, while later ones have much flatter, sharp corners defined by mold parting lines, sometimes with additional material evident at the prow. On a separate later occasion, the radiator sections were damaged, requiring a coarse, misaligned rework of the lower mesh details. Mantua produced its CR-4 from 1978 to 1990 and offered it in 15 different decorations, all using the “boxier” shell with reworked grilles.

There are 14 known private and railroad company names produced by the two companies, with two variations each for Bell Telephone, U.S. Steel, and Westinghouse. There are three variations each for General Electric and Republic Steel. With the exception of Santa Fe, which appears to have been a TYCO exclusive, Mantua essentially duplicated all of the previously delivered TYCO CR-4 road names of the 1960s, with updated logos and paint colors. Mantua also added some new names. In sum, 22 different road name/paint scheme variants are known as produced by the two companies over more than 30 years of production. This makes for an interesting series of models to consider collecting.

Mantua assigned the CR-4 diesel the model stock number prefix 408, with a three-digit suffix to identify the road name. Mantua skipped three catalog numbers in its release sequence: 401-108, 401-109, and 401-112. It’s possible these stock numbers were planned, but did not materialize for a variety of reasons, including possible licensing issues, etc. In many cases, a specific Mantua stock number suffix was assigned to a particular name to stay the same, for use with any model. For example, Mantua assigned its suffix “-111” for Hooker decoration on multiple models. Mantua may also have produced un-cataloged or promotional units not intended for sale to hobby consumers, and used those suffixes on such items.

Let’s get down to the details! There are a few ways to differentiate models produced by the two companies. TYCO units have the motors riveted to an unpainted (argent) chassis plate, making them difficult to service. Mantua units have the motor mounted with screws to a blackened chassis, allowing for easy removal if needed. Early TYCO units also have white insulated wheels, whereas Mantua units have black wheels. When it comes to decoration, TYCO units are somewhat notorious for weakly stamped decoration and occasionally fuzzy color separation.

By contrast, the heralds, logos, and company names on Mantua units are usually silkscreened or decals, and typically very sharp. In most cases, Mantua’s paint is brighter and glossy as well. Finally, TYCO did not apply pilot striping to any of its units, whereas Mantua releases often have them; both companies applied sill stripes but used their own unique pattern.

Where releases of the same road names with different paint variations are known, I have assigned an additional suffix character after the stock number to differentiate between them. The exact introduction date for these variations is a “best guess,” as I can find no specific information as to when some of them were introduced.

The final appearance of TYCO’s Plymouth CR-4 was 1970, compared with the Plymouth MDT industrial switcher that subsequently joined the line-up.

Armed with this information, you should be able to identify which company produced any example you might find. Often, you’ll discover this little CR-4 without a box on eBay, train swap meets, or in used/consignment sections at your local hobby shop so one note of caution: model railroaders are notorious tinkerers (I, too, confess to this “crime”), and over the years some chassis and bodies may have been swapped, therefore the chassis and wheel cues may not be foolproof.

Both companies used a couple of different packages for the CR-4. TYCO used an attractive clear plastic clamshell box with paper insert, and it seems nearly all of its road names were available in this packaging, at least initially. Road names that appeared in train sets may also appear in TYCO’s more typical red cardboard boxes. When Mantua reintroduced the CR-4, they also brought back the plastic clamshell boxes, with handwritten stock numbers on the paper insert. Later the paper clamshell inserts had printed stock information, but by the early 1980s, Mantua was packing the CR-4 in its standard blue cardboard box with foam insert. 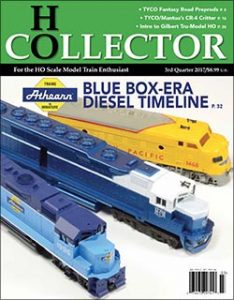 Read the rest of this article in the 2017-3 issue of HO Collector Magazine!