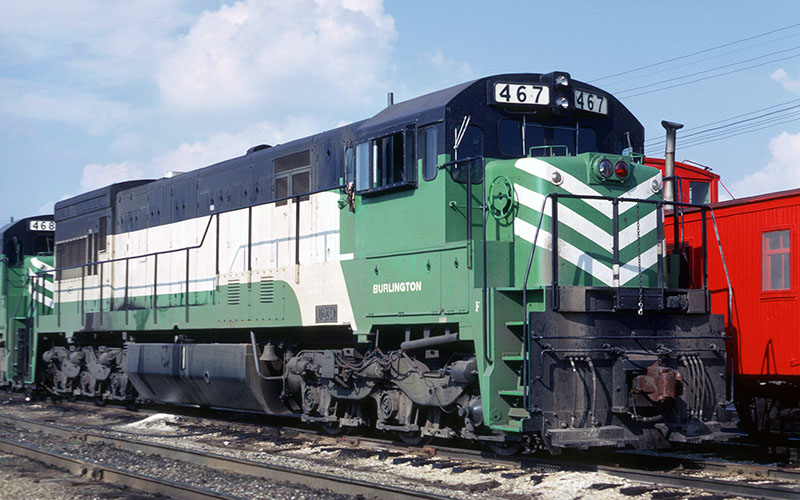 The livery applied to Burlington Northern motive power pre-dates the 1970 start of the rail-road by about five years. In the mid-1960s, Chicago, Burlington & Quincy adopted an early version Cascade Green scheme that included variations to what would be the standardized dress for Burlington Northern. The road repainted a GP40 first and then took delivery of SD45s and U23Cs in these colors. Burlington 467 visited Galesburg, Ill., showing off its pre-merger Cascade Green suit with mate 468 on July 20, 1969. — K.C. Henkels photo, Kevin EuDaly collection 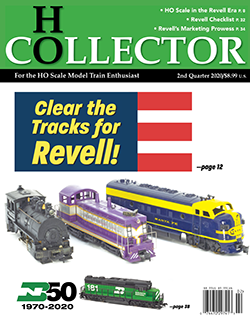 As you read this edition of HO Collector, the merger that created Burlington Northern (BN) from the celebrated “Hill Lines” partners of Chicago, Burlington & Quincy; Great Northern; Northern Pacific; and Spokane, Portland & Seattle is now half a century old. Launched on March 3, 1970, during Burlington Northern’s infancy, HO-scale model trains enjoyed a resurgence that saw several new companies enter the market. Whether the models matched the 1970s prototypes in use or not was not a heavy concern and the then-new BN livery was included in many catalogs on many products. This collection I’m sharing all come from the first decade Burlington Northern was in business.

The Cascade Green with black and white livery that became Burlington Northern’s official and standard scheme during its first decade got a jump-start of sorts some years before 1970. Chicago, Burlingon & Quincy adopted the colors and “hockey stick” version of BN’s Cascade Green dress just before Great Northern introduced its “Big Sky Blue” look in 1967. Perhaps both were experiments to try out a look for the coming of Burlington Northern (I’ve heard stories stating just that). However, while Great Northern’s “Big Sky Blue” received some traction in HO models, the “hockey stick” Burlington scheme didn’t make the scene at the time. There are examples of this pre-BN look used on models such as AHM’s C-424, but it remains an uncommon livery to find in HO.

ABOVE: This C-430 is from TYCO’s trio of Burlington Northern diesel locomotive models which might be the first mass-produced for the road name. In addition to this four-axle Alco, you’ll find similar scheme GP30 and F9A releases that are thought to date to 1970 or 1971.

Given examples observed in “red box” packaging, I credit TYCO with delivering the hobby’s first BN diesel offerings in 1970 or 1971. Though they miss appearances in the manufacturer’s catalogs, TYCO produced a BN scheme for its C-430, F9A, and GP20 in the early part of the decade. TYCO would later revisit BN around 1980 for its GP20 with a differently laid out look for the road’s paint scheme.

ABOVE: In the late 1970s, TYCO featured this eye-catching Cascade Green with silver Burlington Northern EMD E7A in its line. This scheme is suggestive of the appearance of some BN E-units of the early 1970s.

The hobby-favorite F-unit saw several BN models, including American Train & Track, Athearn, Bachmann, Cox, TYCO, and others. Unlike the other roads that were new to the 1970s such as Chessie System and Conrail that saw HO F-units, there were prototypes for BN bulldog-nosed Fs in service when these models were in production.

While many attempts greatly miss the mark or take generous liberties with Burlington Northern’s look, I offer Bachmann’s GP40 from the mid-1970s as possibly the closest to accurately reproducing the scheme on a ready-to-run HO diesel model.

ABOVE: Is this the most ubiquitous BN HO diesel locomotive model? Part of Lionel’s 1970s HO line, this EMD GP30 was produced by Kader in Hong Kong. Lionel included this GP30 in a train set that carried the “181” name as did the model.

For most common and an example that is a “must” in any collection, I have to recommend Lionel’s HO-scale GP30. For additional information on this well-known model, please see my “Collector Consist” column in March 2020’s Railroad Model Craftsman.

Now 50 years old, Burlington Northern models could be the focus of an entire collection exclusively. How many do you own and what’s your favorite?

This article appeared in the Second Quarter 2020 issue of HO Collector. Subscribe today!