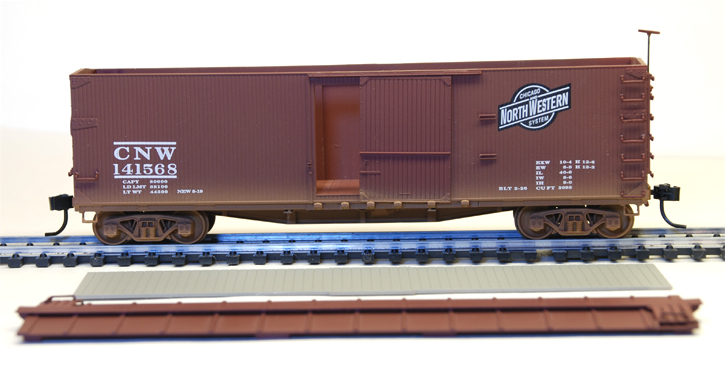 Ertl’s HO-scale boxcar was one of three freight car releases. This Chicago & North Western example is shows the removable roof section and plank floor included on these models. 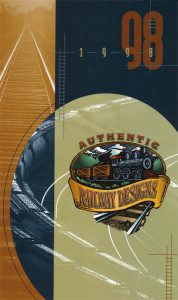 Ertl debuted its American Classics Authentic Railway Designs products at the Chicago National Model and Hobby Show in October of 1996. Model Railroader magazine of January 1997 includes the Ertl announcement as part of the coverage for that year’s industry trade show.  Model Railroader‘s details on the Ertl line includes reference to the kits having come from the former Railway Design Associates line.  The die-cast Kenworth and Peterbilt tractors are noted with the structure line, but no specifics were provided with respect to HO-scale rolling stock, beyond the mention that Ertl’s line would include “rolling stock.”

The collection of releases featured in Ertl’s 1998 catalog included structures, in several categories: American Classics, American Classics II, and Craftsman Series. These reproductions included cold-cast resin and plastic components. Some releases came decorated and others were left for the modeler to build and paint.

While Ertl’s structures and rolling stock were firmly early 20th century, the company also supported its HO line with American Classics Vehicles that included a wide-range of prototypes from a 1948 Peterbilt truck with trailer to modern Kenworth examples with contemporary trailers and flatbeds. The line of vehicle miniatures included Case IH and John Deere tractors and implements.

ABOVE: This red packaging was common for Ertl’s Authentic Railway Designs HO rolling stock and loads. The loads went on to join Life-Like’s line and today see release from Walthers.

Watch for an overview of this interesting and short-lived series of HO-scale freight car models coming in the pages of HO Collector.