As regular readers of HO Collector know, I find hobby literature to be as important and entertaining as actually collecting and owning the models.  Annual catalogs and back issues of hobby magazines provide a wealth of information (not all accurate at times) to help educate and guide the collector on what was made and when by various companies.

TYCO’s annual product catalogs were among the earliest groups I went after for my collection. I started in the 1990s and it was quite challenging then to locate HO catalogs. You could easily leave any swap meet with a stack of Lionel and American Flyer catalogs depicting larger scale (O and S) toy trains, and many European catalogs from companies such as Märklin seemed to get retained and would show up at shows, but other HO catalogs were few and far between… a frustrating situation for the HO enthusiast.

As eBay entered the picture in the late 1990s, the situation changed dramatically. I quickly went for a meager pile of a few vintage HO catalogs to literally stacks of them!

One Size Doesn’t Fit All Years
As I began filling out the years in my TYCO catalog collection (I began with a 1980 publication), I found there were generally two sizes printed. Some catalogs measured in size and format similar to the publication you hold in your hands now (8 1/2 x 11 inches) and others were about half this size (5 1/2 x 7 inches). The smaller catalogs I dubbed “TV Guide size,” based on that famous publication’s format for many years (1953–2005). This size is officially and correctly known in publishing as a “digest catalog” format. By the way, as I’ve researched the more technical end of catalogs, I can also share that those “magazine size,” or 8 1/2 x 11-inch, publications are known as “journal” size (or format) by advertising or printing companies. 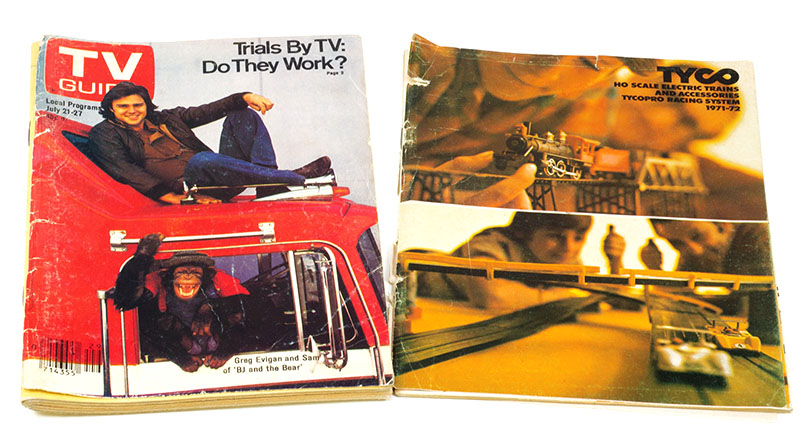 ABOVE: Collectors should be aware that catalogs come in two sizes, even sometimes for the same year. In the 1970s and 1980s, you’ll find Bachmann and TYCO produced large journal editions and small digest versions of annual product catalogs.

Several of my 1970s TYCO catalogs were digest-size and others journal-size, and I simply took it that some years the company printed large (journal) catalogs and other years small (digest) catalogs.

As I was in the process of accumulating each year’s publication, I would cross a year off my list and move on, and it was only as I got down to fewer holes in my set that I started acquiring duplicates. It was here that I came across a surprise: I received in a group a journal-size TYCO catalog for a year that I’d thought only existed in digest format. 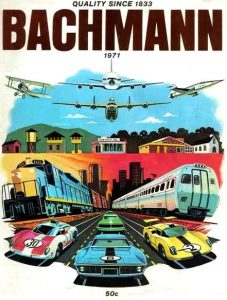 The 1970s seem to be the prime years for locating TYCO’s catalogs in the two sizes. You’ll find Bachmann did the same in the 1970s and the company also followed this two-size-per-year style for several years in the 1980s.

Regarding TYCO’s annual catalogs, I know of only journal format from 1960 to 1970 and then two sizes are common for several years in the early 1970s. Beginning with the company’s 50th anniversary catalog of 1976, I only have larger journal-size editions going forward until the HO train line’s last appearance in 1993.

While any serious collector may consider each size catalog something to have and obtain, the large journal catalogs will serve as the best entertainment and informational source, as the larger size provides better views of the models on display. 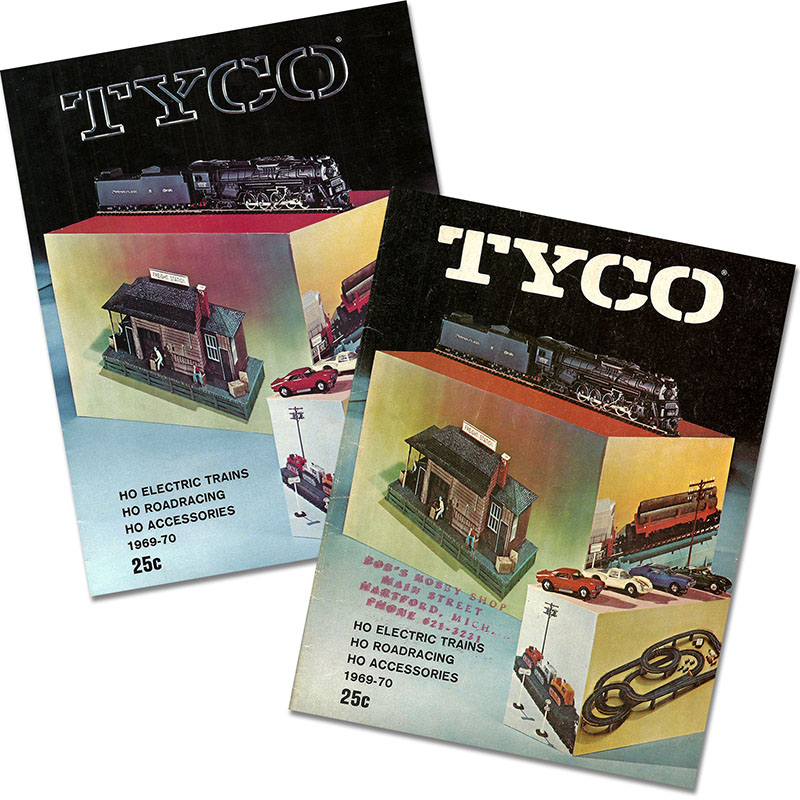 Variations
Another attribute to catalog collecting is looking for variations. TYCO’s 1969–70 catalogs come in at least two variations. The catalog with solid white lettering for the company logo also includes page numbers throughout the publication, while the version with silver hollow letters lacks this feature. The images and information across this 24-page catalog are the same. Similar to obtaining both size catalogs for years when this was done, these variations are something to cater perhaps only to the completist collector.

Conclusion
The idea for this “Going in Circles” installment was sparked by two or three occasions recently on Facebook and in e-mails with collectors who were surprised to discover journal-size catalogs existed for some years.

I don’t have an absolute or complete list for what years and which companies printed multiple sizes of catalogs beyond the general information provided, so I’m not including a checklist. In general, the smaller digest catalogs seem to be more common. I’ve surmised these digest catalogs may have seen inclusion in train sets and obviously they were likely more economical to produce; both might address the reason for their better availability.

My advice is to never pass on a low price on a catalog or group of catalogs when you have the opportunity. I have saved a search on eBay which daily delivers to my in-box a general search for “catalog” in the auction site’s HO model train category.