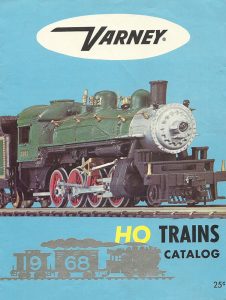 By the end of the 1960s, Gordon Varney’s hobby company had been in the possession of the Kramer brothers (distributors of hobby products and owners of Life-Like among other pursuits) for several years. Varney’s line consisted at this time of a mix of HO-scale releases that were of the manufacturer’s own design, as well as many toolings acquired in the early 1960s from the defunct Penn Line catalog.

For several years (at least from around the mid-1960s to the nearly 1970), a catalog with light blue background cover featuring Varney’s “Old Lady” 2-8-0 Consolidation steam locomotive decked out in Southern Railway green livery. This 1968 edition of the catalog was donated by City Classics owner Jim Sacco to HO Collector’s archive. 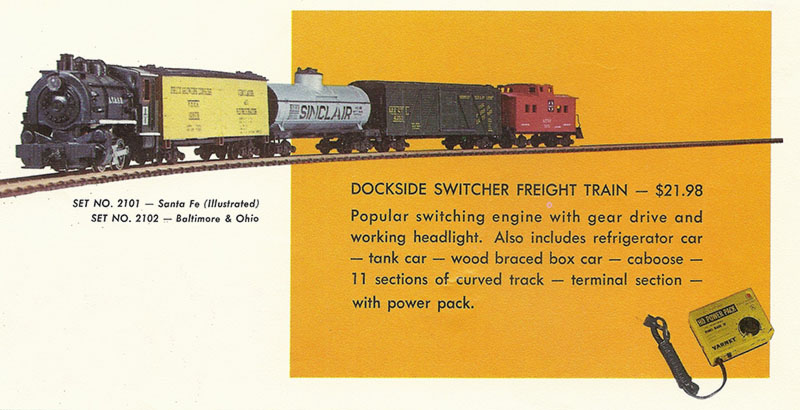 ABOVE: Is there a more classic Varney locomotive than its famous Dockside 0-4-0 steam switcher?

Inside this 8-page color catalog, you’ll find 13 train set offerings. The sets included Varney’s signature Dockside 0-4-0, and Consolidation 2-8-0 steam locomotives, and the company’s die-cast metal Electro-Motive Division SW7 diesel switcher. The former Penn Line plastic F7A and F7B units appear in sets, as does the die-cast metal GG1. The set ranged in price from around $20 to $50 each.

ABOVE: This Varney set is made up of models originally serving Penn Line. The GG1 would just make it to Life-Like’s line in the early 1970s, while the streamlined passenger cars enjoy much longer runs into the Walthers era of Life-Like. 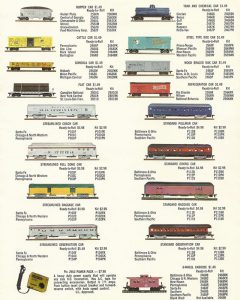 Varney was an early participant in producing injection-molded plastic models for HO scale. The eight freight car models and Eastern-style center cupola caboose featured in this catalog saw introduction during the 1950s. These freight cars, as well as the passenger car models went on to serve Life-Like beginning in the early 1970s.

Though their design was very basic and it didn’t take much to assemble them, Varney did offer these models in kit form in addition to factory-assembled or ready-to-run releases. The freight car came with plastic wheels and X2f couplers.