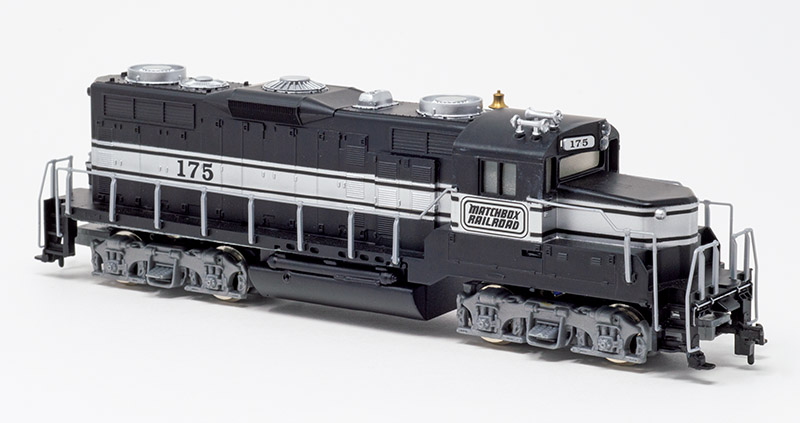 An uncommon example of a very common model, the Matchbox Railroad GP20 from a train set release in the mid-1990s.

Powering a special train set release produced by Mantua was its HO-scale GP20. In the 1990s, Mantua produced several train sets under its “Collectibles” brand. Among them was a Matchbox-branded set with a GP20, boxcar, tank car, flatcar with two vehicles, and caboose. 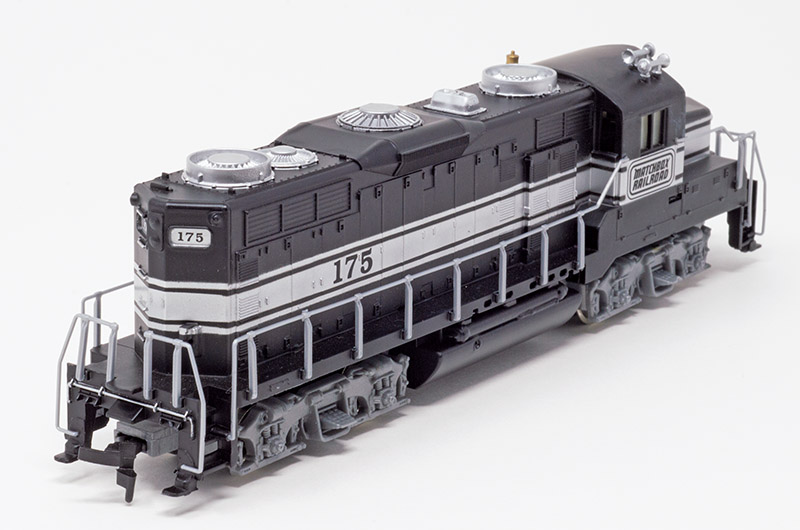 ABOVE: This GP20’s decoration included silver highlights on the rooftop fans, exhaust stack, and air horns. Note the silver accent on the coupler cut lever on the pilot.

The black with silver bands GP20 makes a striking appearance, as does the rest of the set’s equipment also in this livery. The model is made of molded black plastic, but appears to have a light coat of a satin-finish black applied. The fans on the roof were masked off from the body and sprayed silver, as were the horns, and hand painted silver accents grab irons on the back end and coupler cut levers on front and back pilots. Fairly elaborate decoration for this era Mantua.

ABOVE: This is a later version of Mantua’s long-serving GP20 with die-cast metal chassis and all-wheel drive.

When the second generation Mantua line appeared in the late 1970s, the catalog focused on HO-scale steam locomotives. In addition, Mantua’s F-unit (F7A and F7B) and GP20 saw reintroduction. Across the 1980s and 1990s, Mantua made several revisions for these offerings. This mid-1990s Matchbox Railroad GP20 is a version before knuckle couplers became standard issue, but is late enough to feature a die-cast metal frame, newer Blomberg sideframes, and an all-wheel drive mechanism.

ABOVE: The set included three freight cars and a caboose to go with the GP20 and all carried this matching Matchbox Railroad livery.

Watch for this Matchbox Railroad GP20 and the rest of this train set to be featured in HO Collector.