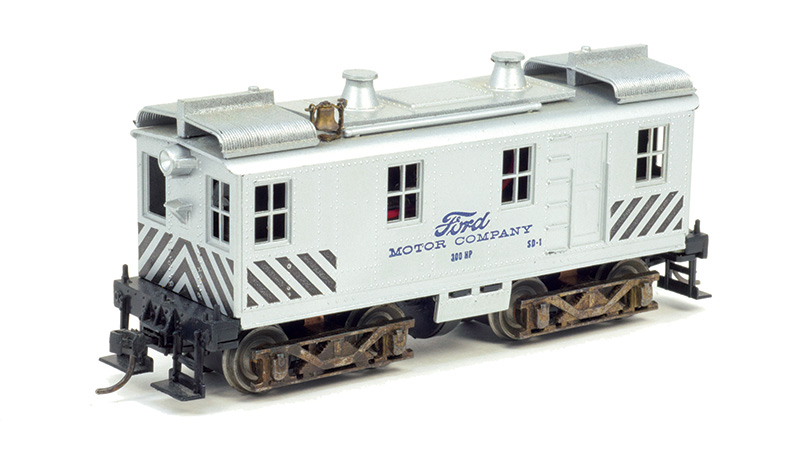 An early 1970s addition to Roundhouse’s product line was this Boxcab diesel locomotive. This Ford Motor Company release was one of more than a dozen decorations initially offered. 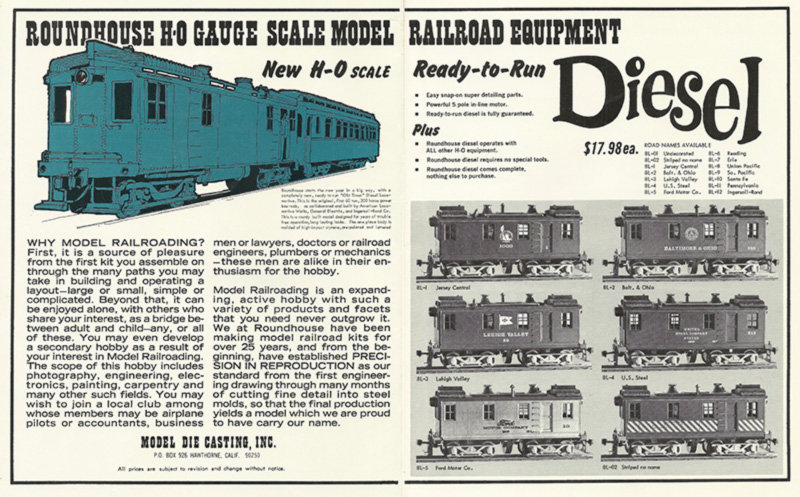 I consider myself a “diesel guy” much more than a steam or electric locomotive enthusiast. Yet given my stated preference and passion for diesels, Roundhouse’s HO-scale Boxcab diesel locomotive has eluded my collecting for decades… until recently.

You’ll find scale drawings by Gordon Odegard in Model Railroader‘s December 1961 edition for this four-axle diesel locomotive and a brief overview of the prototype with focus on Central of New Jersey’s (CNJ) 1000. This little 300-horsepower diesel was constructed for CNJ in 1925 by Alco, General Electric, and Ingersoll-Rand. This mid-1920s boxy version is reportedly a refined design with roots in a more rounded body unit build in 1923. The article states CNJ was first to receive this early diesel and it worked until 1957 and was retired to the Baltimore & Ohio Transportation Museum in Baltimore and put on display.

Information in Model Railroader‘s presentation states additional and similar Boxcabs were built in the mid-1920s and went to work for Baltimore & Ohio and Lehigh Valley. A bigger 600-horsepower Boxcab with a 100-ton (the prior Boxcabs were 60-ton models) rating was the last of this pioneering breed constructed and joined Long Island Railroad’s roster. The locomotive is short with a 17-foot wheelbase and length of 32 feet, 6 inches. This is without question a landmark locomotive.

ABOVE: This Ford example is far from mint and includes some paint dings, was fitted by a previous owner with Kadee knuckle couplers, and appears to be missing a rooftop smokejack detail.

Roundhouse selected prototypes from across many eras and even catered to narrow gauge interests. The history on this company begins with a hobby shop, named Roundhouse, started by two musicians Jerry Joice and Perry Bodkin. In 1938, Clarence Menteer and Charles A. Voelckel acquired the shop and began offering steam locomotive kits shortly after taking ownership of the Roundhouse hobby shop.

Roundhouse/Model Die Casting was a line that I was always collecting materials and planning to get posted to the HO-Scale Trains Resource… and still hope to document the line there in the future. Since the launch of HO Collector quarterly, this pioneering company receives many requests for coverage in the magazine. This early 1970s Boxcab is one of the Roundhouse releases I’m working on for inclusion in HO Collector in the coming year. Both this Boxcab and Roundhouse’s line of hobby items are pioneers.