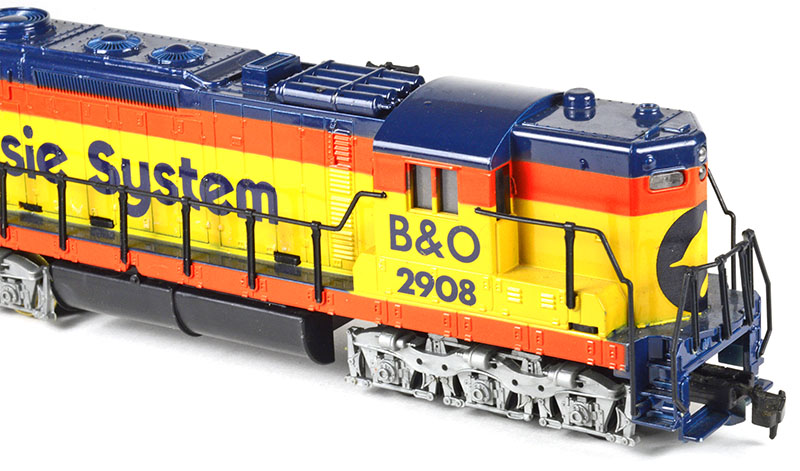 Introduced approximately two decades after Electro-Motive Division’s (EMD) 1958 introduction of the real SD24, TYCO’s HO-scale model came in several liveries during its run with the hobby manufacturer. Among TYCO’s SD24s, this Chessie System release is one of the more eye-catching offerings.

This HO reproduction of EMD’s turbocharged 2,400-hp first generation diesel offering includes respectable 1:87 scale proportions. TYCO’s plastic shell tooling shares several similarities with Roco’s SD24 that arrived in Atlas’ catalog in late 1974. However, the two models do have their distinctions. TYCO’s SD24 lacks a winterization hatch over its lead radiator fan and the exhaust stack is rectangular. The tooling of Atlas-Roco’s effort sports a winterization hatch and features an oval-shaped exhaust stack, among other variances between the two 1970s miniature SD24s.

The model included TYCO’s single-truck PowerTorque mechanism. Then common X2f couplers came mounted to the trucks, which snapped into the shell via open slots along the plastic body and protruding plastic tabs on the truck assemblies. A plastic fuel tank, that housed the metal weight, snapped into the plastic body. The air horn, always presented in raw black plastic, was a separate detail part and fit into a slot behind the cab on the fireman’s side of the unit. 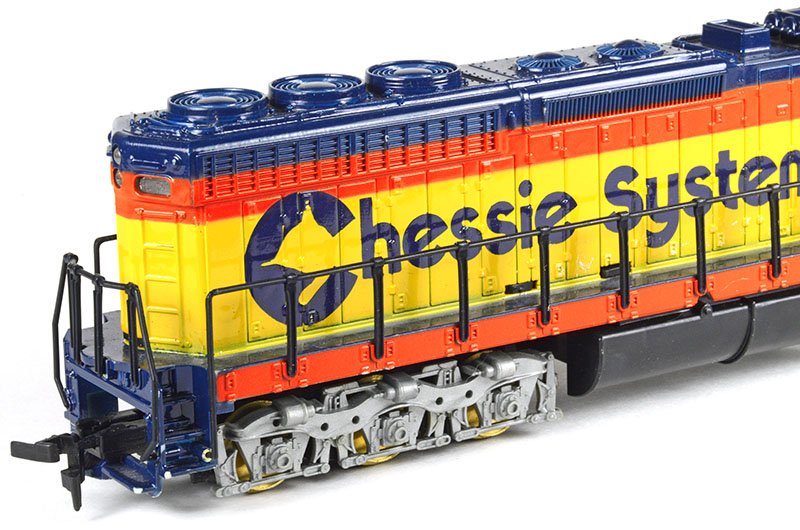 TYCO’s paint on this Chessie System SD24 shows to be heavy and lacks good coverage across the roof and upper side grilles in its Enchantment Blue sections. This was among the first TYCO diesel models, and first of any HO offerings, to include flexible single-piece handrail sections.

Though the truck sideframes were Flexicoils with good detail and dimensional depth for their day, you’ll note they are a bit compressed lengthwise in their presentation. If you examine many samples of TYCO’s SD24, you’ll discover that these Flexicoil sideframes went away at some point during production. Replacing them, TYCO employed its no-prototype six-axle sideframes used on its Alco Super 630, EMD E7A, and GG-1 electric offerings.

This illustration shows the fantasy “Rocky Mountain Line” livery TYCO offered for a few years in the late 1970s for its SD24. Notice, the full pilot and winterization hatch present in the drawing. TYCO’s original catalog model was a custom-painted Atlas SD24 stand-in and it appears that mock-up may have served as the artist’s model.

In addition to Chessie System with Baltimore & Ohio reporting marks (no, the B&O didn’t own SD24s) and Rocky Mountain Line, TYCO produced a Chinese Red SD24 decorated for Chicago, Burlington & Quincy (CB&Q); Rio Grande (with large billboard “flying Grande” lettering); and Union Pacific. While CB&Q did roster 16 examples with high short hood, the other TYCO models have no prototype. Union Pacific’s SD24s came as 30 low-nose examples and 45 cabless SD24Bs; though the road did buy General Motors’ colorful SD24 demonstrators and among those three was a single example with a high nose (EMD 5579, later UP 448). The nearest Rio Grande power was the road’s SD7 and SD9 units, though the later era large billboard livery didn’t make it to any known members of those two classes. In addition to CB&Q, the other prototype for this high-nose SD24 tooling would be Southern Railway, which bought 48 examples spread between itself and two subsidiaries.

This TYCO SD24 tooling returned from Mehano of Slovenia in the early 2000s and was among the last offerings from IHC Hobby. That IHC Hobby edition included a better drive and different fuel tank and truck sideframe tooling. Atlas revisited EMD’s SD24 with a new model announced in 2003. That high-quality SD24 was among the first HO diesels to sport road-specific details for its selection of road names.