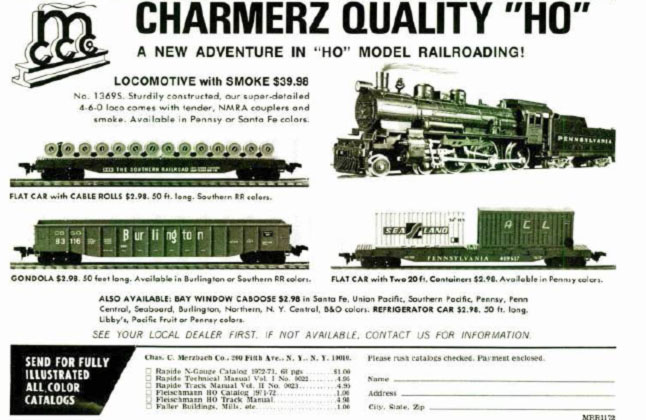 I recently saw a post on a Facebook collector group inquiring about a Santa Fe Alco 1000 diesel switcher (well known to most as either an AHM release or later Model Power offering) that came from Mehano in Yugoslavia. This example was packed in a Parkway box and the person was curious about who that company was and if this wasn’t just the AHM model.

In the early 1970s, at least a few New York-base companies offered model trains (both HO and some N) that were known from other catalogs. Among those was Charles C. Merzbach and his Charmerz line. While there are some unique road names or curious items from these companies. For example, I believe Charmerz had a road-bed track system for HO scale that I don’t know to have been offered elsewhere by any other company, these releases mostly were runs of sold in Charmerz of other companies like Parkway boxes. Charmerz appears to have largely imported from Europe with the steam locomotive and freight cars shown above in a 1972 ad being Lima models. These are intriguing side notes to models you know from AHM, Model Power, and others and largely saw release in the early to mid-1970s.